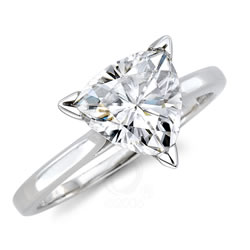 The trillion cut, like the asscher cut, was developed in Holland. Both of these cuts are highly technical; at the time, Amsterdam's cutters were actually creating nothing short of gemology miracles, and the trillion cut is one of them. Traditionally used as accent diamonds, trillion cuts are increasingly being used as center stones in trillion cut engagement rings. For a trillion cut to become a center stone, it requires specific qualities, which will be discussed later in the article.

Although diamonds are associated with light return, fire and spark, trillion cut diamonds are primarily chosen for their shape. The straightforward lines require an excellent cutter, that's why it's rare to see trillion engagement rings that can bear the burden of being a center stone. Any scratches or color defects make a trillion cut bad looking. The shape is typically a triangle; however, rounded exemplars also exist. A trillion cut diamond has 25 facets above the girdle and 19 facets on the pavilion.

These stones have an adventurous aura around them. The specific triangular shape requires the cut to be of the top cutters, the color has to be somewhere around I and G, depending on the material and the look of the ring, but the clarity should, as a rule, be at least that of SI2. Although stones of lesser quality can be used in rings, it isn't recommended to use anything below this, because when you finally notice the difference, your chance to give the diamond back will be long gone. There is an upside, though, to the specific form of trillion engagement rings - they can weigh less, that's why adventurous doesn't necessarily mean costly.

A trillion engagement ring needs to have a good setting. The corners can chip off, much like it is with step cuts like the princess cut. If the corners of the setting chip off, the diamond can fall out and you can lose a whooping few thousand dollars in a glimpse. The usual materials for engagement rings are gold, platinum, steel, or in rare cases, silver or the stronger titanium, but neither silver nor titanium aren’t recommended; silver because it reacts with sweat, titanium because some consider it being ‘dirty’ or unsuitable for use in rings.

Trillion cut rings aren't too popular, but the cut is slowly gaining some recognition among jewelers. Although your local jeweler probably won't have a vast collection of trillion cuts, there is a chance that the jeweler will have some trillion cuts on the ground. If you are not sure about what you want from a diamond, stick to different cuts, because even a ring that appears stylish on the first look may annoy you after a few days.